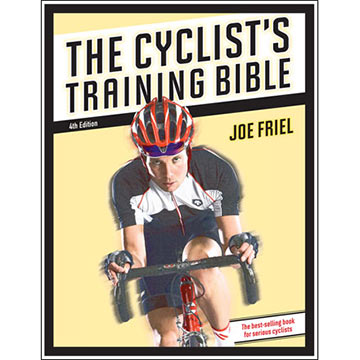 This item is currently not available.

Coach Joe Friel is the one of the most trusted name in endurance sports coaching, and his Cyclist’s Training Bible is the most comprehensive and reliable training resource ever written for cyclists. This edition of the best-selling book includes all of the latest advances in training and technology. Using this book, cyclists can create a comprehensive, self-coached training plan that is both scientifically proven and shaped around their personal goals. Friel empowers athletes with every detail they need to consider when planning a season, lining up a week of workouts, or preparing to race. This fourth edition includes extensive revisions on the specifics of how to train and what to eat.

WHY IS IT that some start their cycling career with little sign of physical talent and years later reach the pinnacle of the sport as elite amateurs or pros? Why do others who excel at an early age end up fizzling and dropping out of the sport before realizing their full potential?

Those who persevere probably had talent all along, but it wasn’t immediately evident. More than likely, the young athlete had a parent, coach, or mentor concerned about the long term—someone who wanted to see his or her protégé in full bloom and was wise enough to bring the athlete along slowly and deliberately. The successful athlete’s workouts may not have been based on the latest science, but a sensible training philosophy was established early in his or her career.

In contrast, the young cyclist who failed to make it as a senior may have been driven too hard by a parent or coach. The intentions of this adult guide may have been good, but his or her techniques left something to be desired.

When I begin to train an athlete, I start by getting to know him or her fairly well—but it still takes weeks to determine the most effective training methods to employ for that individual. There are many factors to consider in developing an effective training program.

A few of them are:
• Years of experience in the sport
• Age and maturity level
• How training has progressed over the long term
• Most recent training program
• Personal strengths and weaknesses
• Local terrain and weather conditions
• Schedule of important races
• Details of the most important races: duration, terrain, competition, previous results
• Recent and current health status
• Lifestyle stress (work and family issues, for example)

The list could go on and on. If you are hoping to find a precise training plan spelled out for you in this book, you must understand that it is not that simple. There are simply too many unknowns for me or anyone else to evaluate you completely without extensive input from you. After all, right now no one knows you as well as you know yourself. Only you can make some of the critical decisions about your training. You do need tools to work with—a set of basic training principles and practices that apply in different ways to different athletes. That’s why I’ve written this book—so that you might understand the basic concepts and do a better job of self-coaching.

Systematic Training
This book is about systematic and methodical training. Some riders think that’s boring and would rather work out spontaneously. They prefer to train by the seat of their pants— no planning, no forethought, and minimal structure. I won’t deny that it is possible to become a good rider without a highly structured system and method. I have known many who have been successful with such an approach. But I’ve also noticed that when these same athletes decide to compete at the highest levels, they nearly always increase the structure of their training. Structured systems and methods are critical for achieving peak performance. It won’t happen haphazardly.

I should also point out that the system and methods described in this book are not the only ones that will produce peak racing performance. There are many systems that work; there are as many as there are coaches and elite athletes. There is no one “right” way—no system that will guarantee success for everyone.

There are also no secrets. You won’t find any magic workouts, miracle diet supplements, or all-purpose periodization schemes. Everything in this book is already known and used by at least some cyclists. No coach, athlete, or scientist has a winning secret—at least not one that is legal. Many have developed effective systems, however. Effective training systems are marked by comprehensively integrated components. They are not merely collections of workouts. All of the parts of effective programs fit together neatly, like the pieces of a complex jigsaw puzzle. Furthermore, there is an underlying philosophy that ties the parts together. All aspects of a sound program are based on this philosophy.

The Overtraining Phenomenon
Is there a relationship between fatigue and speed? Are there studies showing that if a rider gets really tired in training and does that often enough, he or she will get faster? Does starting workouts with chronically tired legs somehow improve power and other aspects of race fitness? I pose these questions because so many athletes tell me that there’s no improvement unless they feel at least a little sluggish all the time. But when I ask these same athletes why they train, the answer is always, “To get faster for racing.” Chronic fatigue is a strange way to get faster.

Recently I did a Web search of the sports science journals to see if any research has found a positive relationship between fatigue and athletic performance. Of the 2,036 studies I came across on this subject, not a single one showed that an athlete performed better if he or she got tired often enough.

All of this leads me to believe that athletes who keep themselves chronically tired and leg weary must be making a mistake. Either that or they have a training secret. But I doubt it. More than likely, the reason for their excessive training is a combination of an overly developed work ethic and obsessive-compulsive behavior.

In fact, there are a few athletes I have been unable to train for this reason. When I allow them to rest in order to go into a hard workout fresh, they interpret the lack of fatigue as a loss of fitness and become paranoid. After a few episodes where they put in “extra” intervals, miles, hours, and workouts, we part company. My purpose in coaching is not to help otherwise well-intentioned athletes keep their addiction going. I’d like to see them race faster, not just be more fatigued and stressed-out than before.

On the other hand, I have trained many athletes in a variety of sports on a program of less training than they were accustomed to. It’s amazing to see what they can accomplish once they fully commit to their actual training purpose—to get faster. When riders go into hard workouts feeling fresh and snappy, the speeds and power produced are exceptional. As a result, the muscles, nervous system, cardiovascular system, and energy systems are all optimally stressed. Once they have a few more days of recovery to allow for adaptation, we do it again. And guess what? They are even faster.

Philosophy
The philosophy of training proposed in The Cyclist’s Training Bible may seem unusual. I have found, however, that if it is followed, serious athletes improve. Here is my training philosophy: An athlete should do the least amount of properly timed, specific training that brings continual improvement.
The idea of limiting training is a scary thought for some. Many cyclists have become so accustomed to overtraining that it seems a normal state. These racers are no less addicted than drug users. Like a drug addict, the chronically overtrained athlete is continuing a behavior that is destructive to his or her own well-being. That athlete is not getting any better, but still can’t convince himself or herself to change.

Read the philosophy statement again. Notice that it doesn’t say “train with the least amount of miles.” Another way to state it might be “use your training time wisely.” For those of us with full-time jobs, spouses, children, a home to maintain, and other responsibilities, using training time wisely is more than a philosophy; it’s a necessity.

What this means is that there are times when it’s right to do higher-volume training, but not necessarily the highest possible. This is usually in the Base (general preparation) period of training. There are also times when high volume is not wise, but faster, more race-specific training is right. These are the Build and Peak (specific preparation) periods. (Periods are explained in Chapter 7.)

While it seems so simple, there are many who can’t seem to get it right. They put in lots of miles when they should be trying to get faster. And when they should be building a base of general fitness, they’re going fast—usually in group hammer sessions. So up to this point in your training and racing experience, how have you been gauging your progress—do you typically go by how tired you are, or by how fast you are? If it’s the former, unless you change your attitude you will be doomed to a career of less-than-stellar racing. Once you figure out that fatigue gets in the way of getting faster and you make the necessary changes, you’ll be flying.

Paperback. 2-color interior with charts, tables, and illustrations throughout.